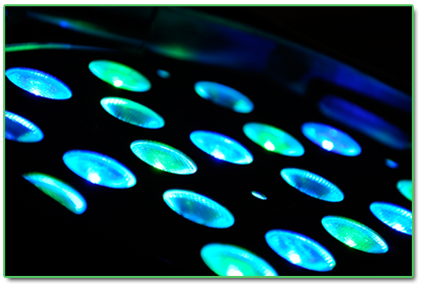 ZnO TO THE RESCUE

High-definition DVD movies and players based on blue lasers have only just arrived on the market, but already a new generation is in sight, promising another fivefold increase in storage density. First-generation discs relying on red lasers could store about 5 gigabytes of data, and blue lasers have taken that to 50 GB. But if disc-player laser wavelengths could be pushed down into the ultraviolet part of the spectrum, disc densities could be hiked up to as much as 250 GB.

Brilliantly white light-emitting diodes also could be made from UV devices, accelerating replacement of inefficient ­incandescent lightbulbs and dull compact fluorescents by LEDs. A practical deep-ultraviolet LED would be especially valuable because ”if you have UV, you can excite anything in the visible,” says David Look, director of the semiconductor research center at Wright State University, in Dayton, Ohio. ”You could have pure red, blue, and green phosphors. Then you excite them in any proportion to get any color.”

The key to making UV-­emitting devices is likely to be zinc oxide: it’s a better material than gallium nitride for making these devices, because it naturally emits (and absorbs) at those wavelengths more efficiently [see photo, ”ZnO to the Rescue”]. Plus it is cheap and abundant—zinc is used in drugs and sunscreens—and is easy to grow into wafers that are virtually defect-free. Gallium nitride, apart from being expensive and harder to grow, emits closer to blue in ­practice; many of the LEDs made from gallium nitride that are on the market today and claim to be UV really are operating more in the deep violet region of 350 to 370 nanometers.

The main hurdle to making zinc oxide devices has been getting stable, reliable p-type material—material with an excess of holes, or electron deficiencies. Making an LED or laser diode requires a junction between p-type and n-type material. But when some of the zinc oxide is engineered to act as p-type material, it tends to revert to its natural n-type state after a few months, which would cause a device to fail. In contrast, blue LEDs made from gallium nitride have expected lifetimes of 100 000 hours, or over 10 years.

A small Columbia, Mo.–based start-up called MOXtronics, a spin-off from the University of Missouri, has made a big advance in solving stability and ­manufacturing problems. By using an alloy of beryllium with zinc oxide, the company has made proto­type ultraviolet LEDs. When coated with phosphors, the LEDs can ­generate white, blue, green, and red light.

Henry White, a professor of physics at the University of Missouri and a cofounder of MOXtronics, says that the new LEDs have the potential to reach wavelengths as low as 200 nm, which is deep in the UV region. He expects the devices’ efficiencies and output power to compete with those of today’s white LEDs, made of gallium nitride, in two to three years. The company is also in the process of making UV laser diodes, he says.

The white produced by such LEDs is soft and bright, unlike that emitted by the sort-of-white LEDs made right now by coating blue LEDs with a yellow phosphor, observes Wright State’s Look. He believes that zinc oxide has a very good shot at ­meeting the difficult demands of the solid-state white light market, which analysts predict will dominate over incandescent and fluorescent bulbs by 2025, saving US $150 billion a year in power in the United States alone.

White says MOXtronics’s devices are stable—though he does not specify just how long they last—because they use arsenic to dope the zinc oxide in order to make their p-type material. Most research efforts heretofore have focused on doping zinc oxide with nitrogen or phosphorus. White and his colleague Yungryel Ryu have developed a technique called hybrid beam deposition, which uses zinc oxide plasma and an oxygen plasma to deposit thin zinc oxide films. Beryllium, arsenic, and other dopants can be added during the process to grow p- and n-type beryllium–zinc oxide alloys. Beryllium is added to widen the bandgap—the energy difference between the valence and the conduction bands—in order to get UV emissions.

Reliance on beryllium could be a problem. Shengbai Zhang, a senior scientist at the National Renewable Energy Laboratory, in Golden, Colo., points out that beryllium could be toxic to workers during fabrication and that people might therefore be reluctant to use it. But the gaseous arsine used in gallium arsenide red LEDs raises the same safety concerns, Zhang says. ”If you can avoid ­[beryllium], that’s easiest, but if you use it, then…you need careful control,” he says.

There are other issues that will have to be addressed. Both Zhang and Look single out the imperative need for a convenient way of making p-type material that lasts for more than two years. White says that MOXtronics’s hybrid beam deposition should be relatively easy to scale and use with commercially available wafer growth machines, but the company has not shown this yet.

Meanwhile, a crucial advance in making p-type material came last year from China, which, along with Japan and Korea, leads the United States in zinc oxide research, Look says. Researchers at Zhejiang University, in Hangzhou, doped zinc oxide with lithium and nitrogen using a standard pulsed laser deposition method to get high-quality p-type material that has lasted for more than 16 months.

If these methods prove easy to use for mass-producing zinc oxide LEDs and laser diodes, it could be the kind of breakthrough that launched gallium nitride technology in 1993. ”Somebody needs to come up with a very cheap manufacturing technique that’s reliable,” Look says, ”a recipe to make good, solid p-type material that anybody can reproduce.”